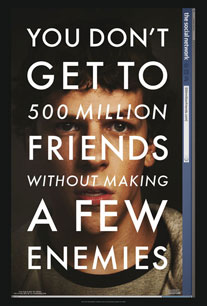 Just about everyone is talking about today’s release of The Social Network. From NPR to Fast Company to MTV, the hype has reached (or perhaps even surpassed) Twihard status.

The movie basically chronicles a pseudo-fictional account of the advent of Facebook and its smarmy Harvard student creator(s)…although “smarmy” can easily be replaced with a certain, smarmier adjective used by Vanity Fair 8 times in the first four paragraphs…and once again at the end, for kicks.

The cause for this wide-range of interest (and ultimate media coverage) is in the movie’s layers. Sociologists can look at the broader scope of social media’s impact on society. PR professionals can reflect on using Facebook to increase brand, event and product awareness. Business execs can examine the ins and outs of a $1B+ enterprise. Psychologists can study the impacts of greed, social awkwardness, and a number of other traits exhibited by those of “smarmy” character. And a few (no names attached) will head to the box office just for a glimpse of Justin Timberlake.

Having been in college during the launch of Facebook, I started using the social networking site in 2004. Back then you had to have a .edu e-mail address and were required to type thefacebook.com. I was also only one of two from my high school on the site.

Six years later, the social network has taken over. As for the movie, we’ll grab some popcorn and see…