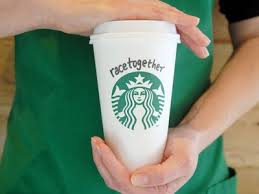 Social media has increasingly become a tool used by companies to promote their campaigns through user-generated content. For example, Coca-Cola’s #ShareACoke campaign provided a hashtag and encouraged consumers to share their Coke physically as well as virtually, generating a lot of buzz for the company and the campaign. However, not all campaigns have as much success.

Take Starbucks’ #RaceTogether campaign. In just one week the campaign was nixed due to a negative response from consumes and Twitter users. USA TODAY reported last Monday that, in partnership with Starbucks, they’ll be tackling the issue of race in America – one barista at a time. Yes, Starbucks and USA TODAY launched its “Race Together” campaign geared toward generating conversation about race issues in America.

Howard Schultz, Starbucks CEO, aimed to encourage Starbucks customers and its employees to discuss race, with the belief that this was the first step toward confronting and solving the nation’s race issues.

Within this campaign, Starbucks baristas were encouraged to evoke conversation with customers about their thoughts on race relations, and in addition, beginning Friday March, 20 USA TODAY’s print edition included a co-authored piece by both companies that will contain race relation “conversation starters” and questions. Customers were asked to tweet responses to these questions using their designated hashtag, #RaceTogether.

The Twitter community got a jump-start on the conversation and put its own spin on the hashtag, but not in the way Starbucks and USA TODAY intended. The campaign received a firestorm of backlash from Twitter users, so much so that Schultz deleted his Twitter account.

So @Starbucks wants to talk #RaceTogether. How about #unionize your employees?

WOW! Just walked into my local #Starbucks & there are folks having a great conversation about race relations! Said no one ever.#RaceTogether

Ask your @Starbucks barista why there are zero Starbucks in Ferguson, Missouri. Then tell them to enjoy a hot cup of STFU. #RaceTogether

I'd like to #RaceTogether on an open field, but
Sorry, @starbucks, I don’t want to pay $5 for a lecture on race, and meh coffee.

These were mild. However, amidst the firestorms were some who supported the initiative. Now the question remains, why did it fail? The high level of controversy surrounding the issue? Starbucks’ stigma? A lack of diversity in campaign ads? Or, should companies simply focus on their core values and initiatives rather than push the envelope and delve into controversial social issues such as race? PR News Online offers 3 PR lessons to learn from this campaign for companies who choose to use user-generated content through social media and fail.